The East has its own narrative of the pear. Where the pear for the West has been the fruit of temptation, the asian pear or nashi is a symbol of the coming of autumn.

The pear often appears in haiku to code the sweetness of the autumn’s harvest, yet its foreshadowing of cooler time to come, juxtaposed to the pear blossom’s pregnant spring.

Sipping on my cider, I pondered how to best express the duality of pears in marking the seasons, without slipping into the ill-veiled orientalism of a generic spa menu. 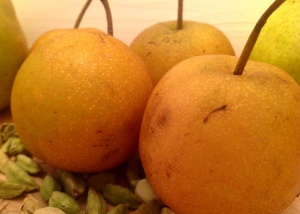 The cider, by the way, was Wandering Aengus‘ Golden Russet single varietal. (“Golden Russet” sounds like a potato. It is, in fact, a kind of apple.) This is apple cider that tastes like an apple in a full-throated robust Michael Pollan way.

I had a little more cider.
Then I abandoned hope of culinary expressivism and fried some street food.

A simple tempura batter ordinarily mixes an effervescent ingredient, like club soda or beer in a one-to-one ratio with flour. In this recipe, a dry, bubbly cider is used. (You could use perry, or pear cider, but that, um, may have been consumed already.)

Process
Make the batter: Mix 1 all purpose flour and salt with cup dry cider and apple cider vinegar. Whisk until incorporated into a thin batter. 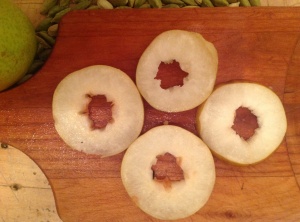 Prepare the pears and oil: Wash pears. Nashi pear have thin skin, so peeling is not strictly necessary. However, the skin tends to separate from the pear’s flesh in the fryer and char. Slice the pear into rings, about 1/3 inch thick.

Batter and fry: Set up a rack for cooling. Heat oil. The oil temperature should be hot, so that it is somewhat unnerving, yet not terrifying or smoking. Dip pear slice in batter, so that there is a even, thin coat of batter encasing the whole pear slice. The nashi pear has a watery, yet firm flesh reminiscent of daikon or jicama, it will froth mercilessly when first added to the oils.
About 20-30 seconds, rotate the pear. After another 15 or 20 seconds, remove when crust is evenly golden. Place on rack to cool.
Dust with sugar, salt or spice. (These are lightly dusted with five-spice powder. Maybe sriracha instead? Horseradish?)